This is a Sport, Folks

Someone who is relatively new to IDPA will often be frustrated with his initial classification.  He may have been shooting pistols for many years.  He may even be a law enforcement officer.  He is an otherwise seasoned shooter, so when he classifies as a Marksman or even a Novice he's not a happy camper.  I understand the disappointment.  I should say: I remember the disappointment. 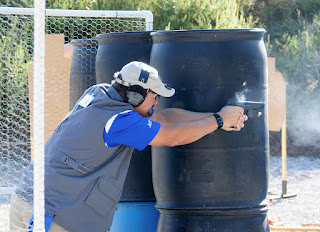 But what the new IDPA shooter needs to appreciate is that the classifier is meant to give you a "handicap," if you will, so you can compete against shooters at relatively the same level as you are.  The classifier is designed to provide the shooter with an accurate indication of where he ranks in this sport.   IDPA is a sport.  Yes, of course, you get some training for concealed carrry.  Anytime you shoot, especially when you are stretched in the way that IDPA and USPA challenge your mental and physical skills, you are training to use your pistol in self defense situations.  That's great.  But the fact is: IDPA is a SPORT.  It's right there at the very beginning of the Official Rule Book:

And as in any sport, there are both special rules and special skills that have to be learned.  And they can't be learned by reading books. They can't even be learned by practicing.  Reading books helps as do practice sessions.  But to improve your IDPA shooting skills you will have to shoot matches.

If a shooter thinks he is classified lower than his actual skills, then he has the chance to prove that in the matches he shoots.  He should shoot a couple of matches and see how he ranks in the scores.  If you have been classified as a Marksman, but continue to score higher than the other Marksman and even the Sharpshooters in your division at any given match, then you probably need to be re-classified.  Of course, if you shoot at a major, sanctioned IDPA match and get scores like that, you will be "bumped" to the next level when the awards are given out at the end of the match.

So even if you are an experienced shooter, don't be surprised if you have some things to learn when you begin shooting IDPA or USPSA.  Did I say that this is a sport? Yeah, I guess I did.
Posted by Unknown at 12:08 PM