No match for me this weekend.  I might have shot in the Pro Am steel plates tournament this year, but I had a men & boys camp out this week with church.  A few things happened this week, however.

First, I got my first USPSA classification.  I've actually only been able to shoot 4 classifier stages in 4 different matches, so there's not much to average yet.  I'm sitting at 68% in Production division, which puts me in B class.  That's fine for right now.  I really need to shoot more USPSA matches this year.  The two classifier stages at my first two matches were pretty pitiful.   All I really need is one more 75+% score and I'll be in A class. 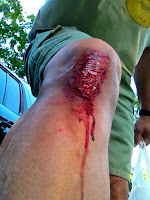 Second, I took a dive practicing at our club this past Thursday.  I was doing the Seeklander drill "Long Movement into Position" when I stumbled and fell moving from P2 to P3.  I was moving left to right fairly quickly and went into the rocks pretty hard.  Because I kept the gun up and down range (finger off the trigger) everything was fine except for my right knee and right elbow and arm.  Lots of blood and wounded pride, but hopefully no lead poisoning from the rocks.  Lots of lead on those pistol ranges and it hadn't rained in a while.

I really don't know if there's a lesson in this. I just think I lost my footing in the loose rocks.  Maybe I should slow down a little.  But maybe not.
Posted by Unknown at 10:08 PM