This past Saturday we had our monthly IDPA match at Arnold.  I was the match director this month, so  I planned the stages and whatnot.  The first time I did this earlier this year I shot horribly.  I was too preoccupied with making sure everything was going well during the match.  I didn't stick with a squad to shoot, but I just dipped into each stage, shot, and left. That's a recipe for a poor performance.  I normally need more time to mentally prepare and run through my plan a number of times in my head before I actually shoot.  This month I stuck with a squad for the whole match and only walked around to check on things when I finished shooting a stage. 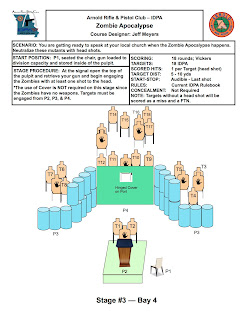 Even though I did well relative to everyone else, I was not really happy with my shooting on most stages.  My reloads were slow. I had at least two episodes where my gun did not chamber a round when I reloaded.  That happened on my first stage.  As I said in an earlier post, I believe I'm causing this either by 1) hitting the slide release with my strong hand thumb during the reload, or 2) just jarring the gun so hard when I put the mag in the mag well that the slide releases before the magazine is fully seated.  Either way, I need to work on that.  So I won 4 out of the 6 stages, but I didn't feel great about any of them except stages 5, 6, and 7.

The "Zombie Apocalypse" stage was fun.  It was closer to a USPSA stage because no cover was required (zombies don't have guns) and there were a ton of targets that required you have a plan in your head before you started shooting.  I had a smoking time, but missed two head shots.  Sigh.

I need to work on my reloads.  Not just because of the problem I described above, but also I've noticed that I've slowed down.  A 2 second reload is too slow.
Posted by Unknown at 9:07 PM