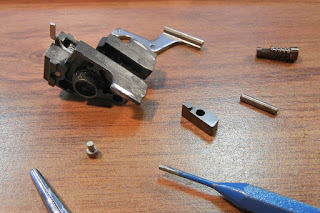 So I mentioned in earlier posts that I've been having problems with a dead trigger after some hard and fast reloads in my M&Ps.  I spoke with Apex Tactical last week and they said that it was probably caused by sear bounce and that I needed to replace the sear spring with a larger one (1/8th inch).  They also suggested that I replace the sear housing block cuz the old ones may not be able to take the larger sear spring.

So I ordered two new sear housing blocks and two larger sear springs.  I installed them in both guns today.  Now I just need a semi-warm day at the range to see if this worked.  I sure hope it did.
Posted by Unknown at 1:30 PM No comments:

The shooting season is mostly on hold until March. That's not to say I won't be shooting a couple of IDPA matches over the winter.  At ARPC IDPA we will have have our monthly matches in January and February. Some of the other local clubs may also.  But honestly, the ice, snow, and bitter cold sometimes make these events less than enjoyable.  I shoot these matches in the winter just to keep fresh.  I hope there will be warmer days now and then so a few of us can get to the range and practice.  But most of my "shooting time" will be given over to dry fire practice and reloading ammo at home.

So here's where I stand right now in IDPA and USPSA.  Remember, this blog is for me to keep easily accessible records of my progress in these shooting sports.  But I guess it could also be a venue for my shameless self promotion.  Whatever.

The only IDPA classifier I shot in 2012 that changed my standing was in March, where I classified as SSP Master.  I discussed that here and in this post.

My USPSA classification in Production was bumped from B to A Class on December 15th.

I shot one gun this entire year—my Smith & Wesson M&P Pro 9mm. The only exception was at the ARPC Revolver match in March.  Shooting the same gun in IDPA and USPSA helped me enormously.  I didn't have to make adjustments for different grips or triggers or sights or whatever.  I figured that if I was gonna get gooder, I needed to concentrate on one gun.  I think this was a good decision.  So I shot SSP (Stock Service Pistol) all year in IDPA.  And I shot Production all year in USPSA.

I haven't been posting much lately because I've just been grinding away at practice.  I know my weaknesses and what I need to improve on.  Now I just need to train in such a way that I can correct these weaknesses. 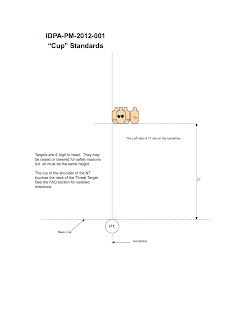 We had great weather to shoot our local club match today—about 50 degrees, overcast, with no wind.  Pretty amazing for a December match.  4 of the 7 stages consisted of the annual IDPA Postal Match.  They were very simple stages for the most part.  I know that IDA HQs has to design stages that everyone in the country can use, so they tend to be pretty "narrow" stages.  Shoot straight with only minimal movement.  That's fine.  They tend to favor those that have speedy splits and transitions.  One of the stages ("Cup" Standards) was pretty squirrelly for an IDPA stage.  IDPA stages very seldom have you transition to weak hand shooting in the middle of a string.  This one did.  It reminded me of a USPSA classifier stage. This is the only stage that I really screwed up on.  I got two misses shooting the weak hand portion.  Rats.

The results are now posted.  I see that I had too many points down.  Speed rules, but I need to continue to improve my accuracy.