Went to the range for less than 30 minutes this morning.  I needed to chrono some rounds before I made  hundreds and hundreds of rounds with this formula for upcoming matches.  I only took about 35 rounds or so.  After I finished chrono-ing, I loaded two magazines with 11 each, set up a metric USPSA target, and walked off 50 yards.  I shot the first magazine at a rate of about 1 shot per second, maybe a little faster.  All 11 shots on target (5 As, 5 Cs, and 1 D).   They were all just a bit high.  Tried again.  11 shots at about the same speed.  All on target again (4 As, 6 Cs, and 1 D).  The holes were more centered this time. I'm happy with this.  If I can hit As and Cs from 50 yards with my not-super-accurate M&P Pro, that's cool.
Posted by Unknown at 2:02 PM No comments:

Time for another brief match review.  I shot a 7-stage club match on Saturday in Sparta, IL.  There were 5 classifier stages and 2 larger field stages.  I designed one of the field stages.  The other one was a modification of a stage at the up-coming Ohio State Sectional.

I decided not to shoot Production for this match, but rather to shoot my normal production gear but in the Limited 10 division (minor PF).  There was really only one reason for that.  I didn't want to get bumped to M class shooting the 5 classifier stages.  Right now I'm on the cusp at about 83.9% in A class.  All I need is a high score on a classifier to push me over into M.  So what?  Well, I'm not ready to shoot at the level.  Cleaning up classifiers is one thing; shooting well on complicated field courses is something else.  I'm pretty good at short, quick classifier stages.  But I'm not even shooting up to my A class percentage in most matches.  When I start winning or coming close to winning against A & M class Production shooters, then I'll be ready.  I'm not trying to be a sandbagger.  I'm just being realistic.

Other than that, just a few observations for the record:


- No gun problems at all (yea!).
- Standing reloads (on classifier stages) were good
- Hit the steel nicely this match (except for one that didn't fall).
- I had a couple of hiccups reloading on the move.  I need to work on that.
- Accuracy was better this match (except for my first classifier stage where I was pushing                  my speed way too much).
- I watch myself on the videos and again I think: I'm too slow. I need to work on darting from one position to another.  Move faster, you old man!

Here's a video of me shooting Stage #6 (my design)

Posted by Unknown at 2:58 PM No comments:

Hey, I'm #19 on the USPSA Top 20 by Division list (Production Division, A class).  If only my match performance would come close to my paper percentage! 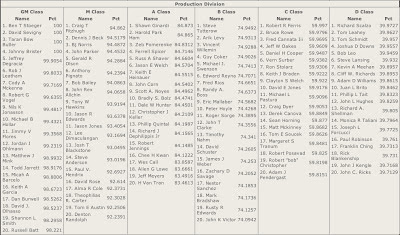 Email ThisBlogThis!Share to TwitterShare to FacebookShare to Pinterest
Labels: USPSA

I've got some new magazine holders for my USPSA production set up.  They are awesome!  I sold my Safariland 773s and got these DAA Race Master Master Magazine pouches.  They are pricey, but worth it. 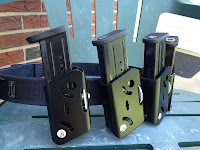 What's cool about these is how easily they draw.  Most mag pouches are designed to hold the magazines from the sides.  This one holds it in the rear with a long flat insert that is spring mounted.  The magazines slide out like butter when you grab it.  But it doesn't fall out when you run, jump, or do summersaults and cartwheels. Seriously.

I've been dry fire practicing with these for about a week and I love them.  We'll see how they work in the next match I shoot, which may just be AREA 5 in June. 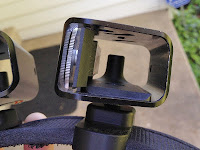 I liked them so much I've ordered a pair of the plastic DAA Racer holders for my IDPA set up.  They use the same system.  I did have to use the modified spacer so that my M&P mags would fit.  HT to Ken for introducing me to these babies.
Posted by Unknown at 4:15 PM No comments: 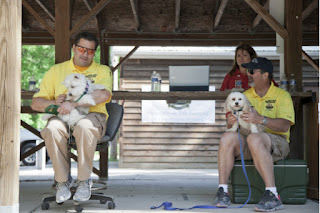 The long-anticipated 2013 MO State IDPA Championship match was this past weekend (May 10-11).  We ran about 180 shooters through 10 challenging and fun stages. Some videos and pictures of the match are just now surfacing on the IDPA at ARPC Facebook page. I didn't take any hat cam videos this year.  And I didn't even think about having anyone take videos of me shooting.

It's always a challenge to shoot well at this match.  As an assistant match director I'm working my tail off to get things ready to go.  Keeping my head in the game is not easy. I wanted as little distractions as possible so I didn't video anything.  Another challenge is that the match directors and CSOs shoot through the stages on Friday morning very quickly in 4-man squads.  There's not a lot of time to size up stages and go over your plan before you shoot.  Before you know it, you are on the line and ready to go.

So here's what went well for me.  First, the first stage of a major match has been a challenge for me in the past.  I've often made costly mistakes shooting the first stage.  Recently, however, I've solved this problem by being much more careful and deliberate starting out.  I don't care about winning that opening stage.  I just want to record a good score and be warmed up and mentally ready for the match as a whole.  So had a decent run on Stage #9 (the first stage our squad shot) and then was ready to kick some butt.  I smoked the very next stage (#10).

Second, I was pretty consistent the entire match.  I didn't win any individual stages, but I placed in the top 5 in many and in the top 10 in most.  That was enough to win the match for me.

Third, I had no major mental mistakes.  The only procedural I got was on the stage I designed!  Sigh.  But I was rushed on that stage.  I should have asked for a little more time.  I was called to the line quickly and didn't get a chance to run through the stage in my head.  I engaged some targets through a port in the wrong order.  Dumb.  But I was fast enough on that stage, so it didn't hurt me too bad.

Fourth, I had no gun or ammo malfunctions during the entire match!  Yippie!  I believe I've finally got everything running smoothly.

Now for some self criticism.

First, I had too many points down (70).  I had no accuracy meltdown on any particular stage.  I had 2 mikes in the match, and I only got a few 3-down hits.  But I had way too many 1-down hits on close targets that should have been zeros.

Second, even though I had the third fastest raw time, I still think I can improve on my speed, especially my movement from position to position.

Enough for now. Here is the link to the results.  And here is a really cool spreadsheet analysis by Ken Rihanek.  Lot's of photos here.
Posted by Unknown at 11:06 AM 2 comments: