Just a few reflections on the ARPC IDPA club match this past Saturday.  The match was fairly straightforward.  6 stages.  About 95 rounds.  No shots past 15 yards.  One swinger.  One moving set of targets (from left to right).  Shooting around a truck.  Sitting at a table.  Through a small port.  Nothing terribly difficult.

Three of us decided to shoot "carry guns" this match, instead of our normal "race" guns.  So I shot with my favorite carry gun—my .45 caliber Kimber Ultra II Tactical.  Normally I shoot my M&P in SSP division, but this match I was shooting CDP. 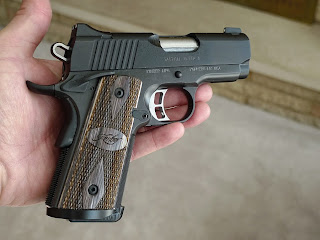 Considering that I haven't shot this little 3-inch gun seriously in over a year, I didn't do bad at all.  I was 3rd overall and division champion in CDP.  But the cool thing is this: every time I shoot this little pistol I like it even more.  Even though its only got a 3-inch barrel, it is incredibly accurate.  I believe I'm more accurate with this tiny Kimber than I am with my full-sized, 5-inch STI Sentry.  My accuracy was really quite good at this match except for one stage where I got pissed off and dumped one round into hard cover and got a mike.

I really hate it when guys claim that their own guns are the best.  It gets old on the gun forums.  I've shot a number of pistols over the years.  I've owned quite a few that I've since sold because I just never really liked them.  But this little officer-sized 1911 from Kimber is one of my favorite guns.  I carry it in the Fall and Winter, because it's just a little heavier than my Kahr PM9 and not the best for summer clothes.  I've shot this gun in bug matches and in a night match a few years ago.  In every situation it performs flawlessly.  No malfunctions.  Everything just works nicely.  Even the grip safety engages more reliably than my STI.

Here's a video of one stage:


I got a procedural on this stage because I tried to do a reload with retention before getting to the last shooting position, but I dropped my magazine, picked it up, and didn't get it in my pocket before I shot the last array.  IDPA rules can be maddening.
Posted by Unknown at 7:34 PM