There are many reasons I'd just rather not even think about this match again.  I had pretty high hopes for myself—like an A Class win.  But those hopes were not realized.  I was very disappointed with my performance, mostly because I made mistakes that I thought I had corrected many months ago.  Like zits on a teenager, they resurfaced at just the wrong time.  Here are my stream-of-consciousness thoughts about the match.

• The USSA range was super cool.  Loved the facilities.  Bought some cool hoodies and shirts.  Even though it rained the second day, there was grass on the field courses.  Wherever the grass wore away between the fault lines, they put down some meaty sawdust that helped with the footing.  You can see drone-flyover video of the USAA facilities here.

• My squad (#6) shot six stages in the morning on Thursday, six stages in the afternoon on Friday, and six stages in the morning on Saturday.  That turned out to be the worst possible schedule.  Thursday was great weather—sunny and 60 degrees.  No problem. I shot the first six stages okay with no major problems.  Friday afternoon was raining and the temperature dropped about 20 degrees.  Not good.  When we started on Saturday at 7:45 AM the temperature was 32 degrees with frost on the ground.  By the time we finished it was in the mid-40s. The weather just got me PO-ed on Friday.  It didn't help my mental game.

• My M&P performed well.  I had no mechanical issues at all.  Once I failed to seat the magazine all the way on a reload, but that was my fault.  Once I went to slide-lock for a reload but the bullet didn't chamber all the way and I had to rack the slide.  But beyond that the gun functioned flawlessly.  I used hand-loaded 9mm ammo—Berry's round nose 124gr on top of 3.9gr of TiteGroup in new Starline Brass cases.  My ammo chronographed at 130 PF. 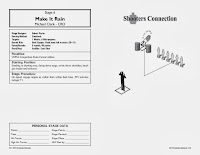 • On the first stage of the first day I was the first shooter.  Yikes.  It was stage #6.  I played it conservatively and shot the six poppers clean and the swinger with two C shots in 5.20 secs.  I believe I could have been faster, but I was happy to start the match with a clean run, especially since I couldn't get that stage out of my head the night before trying to get to sleep in the motel.  The first stage pretty much set my agenda for the first day--conservative shooting with clean runs.  I had to kick it up a notch the next day.

• The next day was windy, cold, and rainy.  I let that get to me.  Not good.  But I don't want to do a day-by-day commentary.  Let me talk about what I need to work on.

• I had 4 understandable misses.  2 were on poppers that I heard ding but they didn't fall.  They were on field courses where I didn't stop to watch poppers fall.  Why didn't I ask for calibration?  Because all but one of the poppers in the entire match were forward-falling.  There really were no adjustments on these poppers.  They would have fallen on calibration.  Another "legitimate" miss was on a long head shot over hard cover.  It was a hard shot. I should have put 3 rounds on it to make sure.  The last understandable miss was on a long swinger shot.  All my other misses were stupid, avoidable, and maddening.  A year ago I was having problems with pulling my last shot on a target array just before reloading. I was anticipating moving and reloading and yanking my sights off the target too soon. I worked on this a lot. I fixed it.  Until this weekend.  Mikes on relatively close targets are maddening.  Just plain stupid.  I need to work in that again.

• I thought my stage plans were good.  My times weren't bad, except for a few cases where I took extra shots on swingers or had the reloading problems I mentioned above.  Apart from the stupid mikes, my accuracy wasn't terrible. I can always work on that, of course.

• The bottom line is that I didn't shoot up to my potential. By that I mean that I didn't shoot nearly as well as I would normally do at club matches or even at my last sectional match.  Perhaps it was just nerves.  After all, this was only my 4th major USPSA match.  And it was my first Nationals match.  How's that for a big excuse.

• My squad was really enjoyable to shoot with.  No jackassery at all.  Just good-natured ribbing and helpful talk about stage planning and mistakes made.

Here are the only two videos of me shooting at the match.  I didn't want to bother with videos during the match so I could concentrate on shooting.  Like it really mattered.

The overall results.  My specific results (painful to read).

The bottom line for me is that this was a fun and educational match.  I enjoyed the challenge of the stages and had a great squad to shoot with.  But I'm competitive enough to be thoroughly frustrated with my lame performance.  Next year's match can't come soon enough.
Posted by Unknown at 9:03 AM